BUCK: Welcome back to Clay and Buck. We got Bill O’Reilly with us now. He’s got over a dozen bestsellers. His latest — Killing the Legends: The Lethal Danger of Celebrity — is out now and is sure to be another massive best-seller. Bill, thanks for making the time. Good to talk to you again.

O’REILLY: Listen, I’m doing this for you guys. You guys are celebrities now, and you need to know about the lethal danger that faces you.

O’REILLY: And I’m not exaggerating. Every famous person in this country has a target on his or her back. But the three that I write about — Elvis Presley, John Lennon, and Muhammad Ali — change the culture of the United States. So, this is a history book, as you know. This is the twelfth “killing” book, and we got 19 million copies in print, the most successful nonfiction book series in history. And I chose these guys because people don’t realize the way we live today in America stems from these three. And when they open and they read their stories and how they all were destroyed — literally — by their celebrity, you learn a lot.

CLAY: Yeah, Bill, when you break this down — I’ve had discussions about this — do you think it was safer to be a celebrity in years past or do you think the risk has always been sort of omnipresent, in particular with social media people able to track where you are maybe in a way that wasn’t the case in the past. I kind of go back and forth because obviously historically, we saw so many different famous people murdered. But it feels to me like we are in a time of great violence — certainly when you look at the crime rates all over the country — and it’s never been easier to go on a social media device and find out where someone is.

O’REILLY: It’s dangerous physically now more than ever before. But psychologically and emotionally, it’s the same. So you go all the way back to Marilyn Monroe, you know, and then you have all the sixties rockers — Hendrix and Jim Morrison and all these people — and then right up to Prince and Michael Jackson and Karen Carpenter and Belushi. It never ends. So, psychologically and emotionally, it’s the same. But you’re right. You leave the house; you’re famous person now, there is a camera on you every second when you’re in public.

It is debilitating, it’s annoying, and there’s nothing you can do about it. And all you need is one nut like John Lennon, just one person, and you’re vapor. The burden that puts on people is just off the chart, and people don’t understand it, and we have a blood sport in America. “Let’s tear the famous people apart.” You know the sport, you see it every day, and now we have no due process. We used to have due process that an allegation may or may not be true. Now, any allegation’s true. Eh, paper doesn’t care. Throw the allegation out.

BUCK: If you’re on the right, then the allegation definitely, whatever it is. You know, if someone accuse one of us, I always say to Clay, of killing Abraham Lincoln? Well, we’re right-wing talk show hosts; so, we probably got at a time machine and figured it out. I was speaking to Bill O’Reilly right now. He is the author of Killing the Legends: The Lethal Danger of Celebrity. It is out there. Bill, I do want to ask you, though, because we were just talking about you said you leaving your house. You’ve got the cameras on you for celebrities.

Leaving your house right now, just for folks, for everyday people is feeling really unsafe. I can say, from New York City here. You know, I was just telling somebody other day I witnessed a fight in broad daylight on the street with two lunatics bashing each other with trash cans — each one a trash can — and they were hitting each other with them. The cops did nothing. Democrats, I think, are finally starting to get a little bit freaked out on this as it might cost them. What do you think about this? You know how this goes.

O’REILLY: The culture has declined, and along with the culture that includes crime and punishment, law and order. But personal responsibility is the big thing. Tonight, on my television broadcast — which we live on BillOReilly.com; everybody can get us there — I open the show with, “You know the government exists for two purposes and purposes only. That is to provide protection for its citizens and to provide a pathway to prosperity.” That’s the only reason the federal, state and local governments exist. Those two simple reasons: Keep you safe, give you an opportunity.

So, the keep-you-safe thig is gone because of the progressive movement which sees America as a racist, evil country that only goes after African-Americans and wants to hurt them; therefore, we got to break down the prison systems and the policing system and build it up again in our vision. That’s what has happened. So, when you in New York City — ‘cause I live here too — have a government and district attorneys — four out of five of them — that will not prosecute dangerous people — will not do it! — then you’re going to have more dangerous people because they can get away with it. And they have. And they are. And thousands of mostly poor Americans are being killed because of it. And you say to yourself, “How can that be? How can that happen?” Because the corrupt corporate media will not report it accurately.

CLAY: We’re talking to Bill O’Reilly. Bill, I’m curious. We’re 36 days from the midterms and everybody can have their opinion about what’s going to happen in the midterms. I’m curious what you think that will be. But also building on that. Do you think Joe Biden is going to run for reelection in 2024? Buck and I are split on that. I say I don’t think Biden will. I think the Democrats are going to force him out. Buck says he thinks they’re so desperate they’ll keep him in. What do you think happens in the midterm and how did that play into Biden’s political future in your mind?

O’REILLY: Well, you know, that I think Buck is a genius, right?

BUCK: Bill is the wisest man I know so this works out really well.

O’REILLY: You know that, right? Okay. So Buck is desperately wrong. Biden, no chance —

O’REILLY: No chance that he runs against Bill.

BUCK: I’m just telling you where, Mark, in this audio; you’re going to have to go out with Travis and I.

BUCK: There’s the thing called A5 Wagyu you’re going to be buying me. It’s very expensive.

CLAY: So you’re with me, though, Bill? You think there’s no way they’re going to put him out again?

O’REILLY: Joe Biden is the worst president two years into office in our history, with the exception of James Buchanan.

BUCK: So, Bill, if it’s not Joe though, who is it? This is always the problem.

O’REILLY: It doesn’t matter who it is. It doesn’t matter. Newsom is circling like a turkey buzzard. He’ll have the money to do it. But it doesn’t really matter who it is, okay? What matters is the American people actually wanting to improve their country. Again, I’m a simple man. You don’t get simpler than I am. Two years ago, we had — in the United States — the most prosperous economy on earth. In the space of two years, the Democratic Party and Joe Biden have destroyed the economy.

There isn’t two sides to that story. If you want to think Putin did it, then you go right ahead and think Putin did it, but those of us in the right, in the real world understand the dismantling of the American fuel industry, the insanity of the spending at the federal level which has eroded all savings and 401(k)s. So if you like that, if you think that’s good, then you’d vote for Biden again, wouldn’t you? I think their idea —

BUCK: I’m glad we agree on something.

CLAY: Yeah. (laughing) If Biden is not running and I agree with you, what does…? I know you know him really well. We love having him on the show. How does that impact President Trump’s calculus on his potentially running in ‘24 if he’s running against an uncertain Democrat as opposed to thinking he’s going up against Biden again? How do you think he would analyze that?

O’REILLY: Killing the Legends is going to sell a lot of copies, all right?

O’REILLY: But Michelle will trump me, pardon the pun. Michelle Obama is the only Democrat in the country that could really go toe to toe with Trump as far as a populist is concerned. She would run as a populist. That’s what Trump runs as. Okay. But we have to get by the midterms first because I’m not sure the American public now at this point in history… I don’t know what it is but, you know, the Democratic Party in November should not get one vote. They should be shut out. What are you voting for, more get dead poor people? Are you voting for more undocumented people in the country in a sense that we don’t even know who or where they are?

Are you voting for more inflation? Do you want to pay more for the stuff you need to live? Is that what you’re voting for? So they should get no votes, and it doesn’t matter what clowns are running on the Republican side — and they have plenty of clowns running on the Republican side. They do, and one of the reasons we don’t have the leadership in both parties that we should have is because good, smart people don’t want to get their throats cut out by this fame-power thing that we have in this country.

It is so dangerous they don’t want to go into the arena, and that’s a subtext to the book. But Trump himself would be wise to disappear for a month. Let the midterms play out. If they go the way I think they will go, Republicans will be very happy on November 9th. But then it shapes up to be, “Who’s going to be the next president?” and basically Trump has to pivot and run on his record and stop with the crazy stuff that he’s putting out there? Would you guys agree with that? 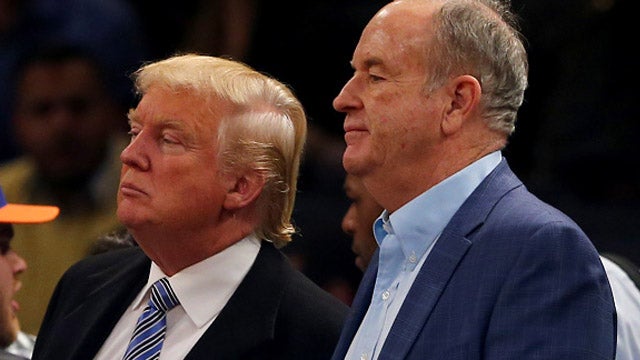 BUCK: I mean, think it’ll be interesting to see what position is in if Republicans do really well, Bill, in the midterms without him even on the ticket and obviously Ron DeSantis is someone that a lot of folks are going to be talking about regardless. So, yeah, I mean, we’ll see. But we’re definitely going to have you back on to talk about both about the election and whoever ends up being the Democrat nominee. But you’re not gonna…? Right now, Bill, you’re not going to put your money down on one Democrat? It could be anybody but Biden as far as you’re concerned? That’s where you are?

O’REILLY: There’s nobody. There isn’t anybody. So, Kamala Harris is done. I mean, the fact that Kamala Harris came out over the weekend and said hurricane relief should be granted by skin color, that… She’s done. Finished.

CLAY: You’re right. I think they’re done with her. I think it’s gonna be Gavin.

O’REILLY: All right. We’ll talk soon, guys. Thanks for having me.

This story originally appeared in Clay Travis and Buck Sexton